Totally ignore the resume of a military spouse.

Military spouses come in all forms. You may see a hot off the press 18 year old newlywed who has never had a “real job”, all the way through industry leading professionals who’ve been in the workforce for several decades.

Let’s talk about the military spouse resume for a minute.

The resume of a military spouse is typically pretty chaotic, let’s be realistic. For any person, military spouse or not, who moves every few years… the resume will not tell the real story behind the skillset of the jobseeker.

When I recently interviewed Laura Yang Renner, the founder of FreedomMakers Virtual Assistant Services who employs military spouses as virtual assistants… her advice? “Ignore the resume… my tip to employers is to be cautious when you’re looking at military spouse resumes. Don’t really consider that their career path of choice, it was their career path, making it work with what they had.”

Peggy de Villiers is a military spouse, and has only 18% of her hearing. She currently manages all substitute teacher demands for 39 schools throughout Duval County in Florida. She is a former swimming athlete and winner of the “World Deaf Swimming Champion” award. She has impressivley broken 10 world deaf swimming records, and is a 16x All American swimmer. Her professional work history is centered around the Human Resources industry.

You can connect with Peggy on LinkedIn.

“What benefit do you believe military spouses bring to the workforce?”

When I asked Peggy, “What benefit do you believe military spouses bring to the workforce?” and this was her response:

“Unfortunately, I think military spouses understand the value of time and thus maximize their time at the organization best as they can as they know they have to make the most impact they can in whatever  time the military allows.

Professional military spouses always have to consider their relevance in the workplace and will be the demographic which has the most up to date and current certifications.

A military spouse is guaranteed to work twice as hard in the workplace because they know they have to create references as best they can since their resumes have a high likelihood of having multiple gaps on it.

Hard skills aside, military spouses will have some of the best sense of humor and will seldom adopt a selfish attitude with their co-workers.”
~Peggy de Villiers 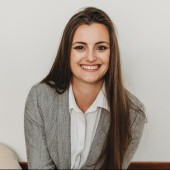 Jaime Chapman is the Founder & CEO of Begin Within, the #1 Military Spouse Owned Business of 2019, USAG Wiesbaden Military Spouse of the Year in 2020, published author, and the Career & Employment Advocate for tens of thousands of military spouses.